Recovery of the SS Great Britain

The interest attached to the operations in progress to raise the Great Britain Steam-ship, previous to her being floated off, has induced us to despatch our Artist, Mr. James Mahony, to Dundrum, with the view of illustrating the several stages of the great labour, in a series of sketches, which we now present to our readers.

First, of the attempt to raise the stupendous vessel out of the sands. This was made on the 29th ult., by Mr. James Bremner, and his son, Mr. Alexander Bremner, civil engineers, who have favoured us with the following details:

The ship lies on the north side of Dundrum Bay, her head in a north-westerly direction, with some falling towards the south or sea-side. About a mile without, are the rocks called the ‘Cow and Calf.’ To the eastward, is St. John’s Point, with its Light-house, distant about three miles. At the south side of the Bay is the stupendous Sleevedona, towering its lofty summit amongst the clouds. Beneath it lies the small town of Newcastle.

The first trial to raise the ship was made under the superintendence of Captain Claxton, whose beneficial watching during the winter, it will be remembered, was of such great service. Having boiler-builders on board, Captain Claxton ordered the upper cargo deck to be tightened, and shored or supported from the deck above; as well as all the coal bunkers tightened. As soon as these preparations were completed, and when the weather and tides became favourable, the ship rose four feet, and was maintained at that height by pulling her to one side, and filling in stones at the other side. Additional attempts of the same kind were made; but the ship being raised to the height described, lost her former buoyancy, and, consequently, could not rise higher.

First, Twenty large boxes were made, to contain upwards of thirty tons of sand each. Ten boxes were suspended on each side by strong chains, which went over pullies in the upper part of large vertical baulks of timber, the same chain passing through pullies attached to the side of the ship, thus doubling the weight of sand in the boxes, less the friction; and, it should be added, those boxes in the middle of the ship, opposite the engines, had four powers to each, to prevent straining the ship at that part. Very powerful levers were put to the fore-end, capable of lifting about 190 tons; and, along the sides opposite the large timbers, formerly on the ship, were also placed levers, capable of lifting about 200 tons each. In addition to this lifting power of boxes and levers, was applied screw-power, capable of lifting 160 tons. These screws were placed, near the hawse-holes, on a stout frame of timber, which was on immense end-wood supports.

When the lifting power was about complete, on the 13th of July (spring tide), it was thought advisable, as the good season was passing, to make the first attempt; when, to the surprise of all on board, the ship lifted so rapidly, that the valves had to be opened to prevent her going up further.

To provide for maintaining the ship at the required height, some thousands of small piles were driven, reaching from the surface of the sand to that of the rock; and on these piles were laid foundations for vertical supports, which, by an ingenious contrivance, were made self-acting, so that as the ship rose the shores placed themselves.

In addition to these shores, were many immense wedges, hauled in at the fore-keel and bilges; stones were also put under her with long shutes from the deck.

The gratifying result of all these preparations was, that, on Thursday, the 29th July, the ship was raised to the required height, so that the boiler-builders could get at the bottom to make it water-tight.

Among Mr. Mahony’s illustrations, the first shows the huge vessel as she appeared when beginning to rise.

The Engraving above represents the busy scene of the men cutting a deep trench in the sand, at low water, from the stern of the vessel, out seaward.

To protect the stern of the ship from the gales of last winter, it became necessary to devise some means; and this was done by Messrs. Bremner, constructing a breakwater, which Mr. Mahony has sketched. It was composed of pieces of bulk, of from 13 to 17 Inches thick, and arranged In the manner shown in the cut: but, scarcely had this work been completed, when a fierce gale, on November 9th, in a moment laid this labour of man’s hands prostrate, smashing the beams like so many reeds.

Our Artist has next applied himself to the illustration of the means adopted for lifting the leviathan Ship, a dead weight of from 1500 to 1600 tons, and in which the Messrs. Bremner have been so pre-eminently successful. The ‘means and appliances’ are shown in the following Sections:

Sect. 2.—Close by the Bows of the Ship, showing how the wedges crossed each other, and were worked from above, by a capstan, the arrows denoting the upward movement of the rope. The dotted line shows the sand-line, and the basement, the stones driven by Captain Claxton and Mr. Bremner.

Sect. 3.—Means by which the shores raised and placed themselves securely in their proper positions, when the Ship had reached her intended height; all extremely simple in themselves, but, by no means, less ingenious. 1, Ship’s side; 2, shore; 3, cleat, made fast to ship’s side by two bolts; 4, cleats, to keep the preceding steady; 5, shoot for shore to work in ; 6, piles driven home to rock, to secure the foundation; the arrows marking the motion of the rope, worked by 7, from above.

Sect. 4.—Showing the shoot for conducting stones under the Ship’s bottom, as well as the rammer: 1, line of Ship’s side; 2, upright; 3, shoot; 4, rammer, shod with iron; 5, men casting stones from above, into shoot, the arrows marking the rope’s motion for working the rammer; 8, section of the Shoot, by which stones were conveyed under the bottom, and then rammed down, so as to form a foundation for after-work.

Next, are two views of the sand-boxes, no three of which are alike, as they have to be used afterwards as camels, to float the ship. In the Cut is shown how the chains passed through and around the boxes, as well as how they were placed—1, out of one of the ship’s portholes—2, end of the balk: each box holds 30 tons of sand.

Lastly, are the Bows of the Ship, with the remains of the great lever under them, loaded with old anchors and other deadweights; the props fixed around the stern, when raised; and men removing the remains of Captain Caxton’s Breakwater.

Our Artist relates that while the ship was rising, the rattling of the chains was very extraordinary. The men (riggers) shown at work in the last sketch, were brought in the Government steamer, Birkenhead, to assist in the great labour; there were 60 of them.

On Monday, the Birkenhead arrived in Kingstown harbour, from Dundrum Bay, and reported that the result of another experiment made on Saturday had been unsuccessful, solely because the pumps were not sufficient to keep out the water when the vessel was up. She now lies in the same place; but another attempt will be made, with proved arrangements for pumping.

A false report soon reached Liverpool, that the Great Britain was afloat, and on her way to the Mersey; but, a letter from Captain Claxton, dated Dundrum Bay, August 14, 1847, runs thus:

No tide, only 12 feet 6; we want 13 feet 6; and tide-table gave it. Every exertion was made both by ourselves and her Majesty’s ship. Her Majesty’s people stand by us, and her ship returns on the 22nd. I cannot say enough in praise of their exertions. I beg to add, nothing can exceed Messrs, Bremner’s exertions (father and son). They have been beat this time by the elements. Mr. Bellamy we are extremely lucky in having, and his suggestions are most valuable. He stands by us with 56 men. Her Majesty’s ship Birkenhead will be here on the 22nd or 23rd.

At Liverpool, the opinion is that the vast Ship will not be taken off till the high spring tides of the 27th and 28th of the present month, which will be about three feet higher than those just passed off.

In the meantime, our Illustrations explain the means by which it is hoped the Ship will ere long be floated.

It was likewise reported that her Majesty would, in her excursion, visit the Great Britain; and Dundrum being but two hours’ steaming from the Isle of Man, obtained credence for the rumour. It will, however, be seen by our Report of the Excursion, that the Royal Visit did not take place.

Incidentally, the BBC Coast programme which covered this event erroneously attributed the recovery to I K Brunel; you can see from the evidence above that this was quite wrong! 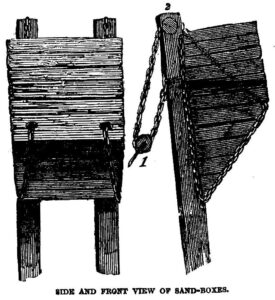 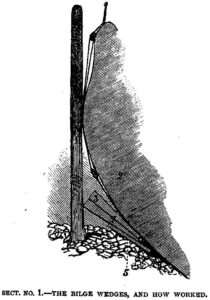 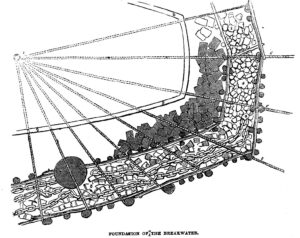 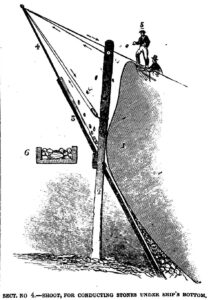 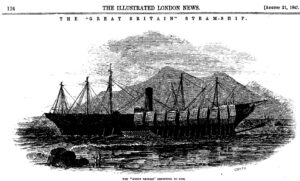 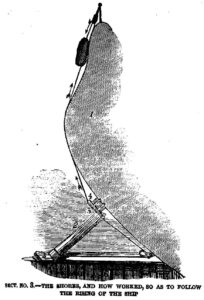