Much of David’s childhood was spent at Ivy Hatch, Kent. He has vivid recollections of his grandfather Donald who lived nearby; he would share with David stories of his time in the RNAS as a pilot in the First World War.

In 1969 after completing his schooling at Sevenoaks School, his mother Dinah decided it would be a good idea if David travelled before settling down to university. Before he had a chance to consider this new idea he found a camera, flight tickets and rucksack packed and his parents waving goodbye to him; he was on his way to East Africa. They had at least provided the 18 year old David with a list of people to contact once he had arrived. He spent two months in East Africa touring Tanzania, Kenya and Uganda, and working on a school building project in Lodwar, Lake Rudolph, in northern Kenya. Two months later David returned to the family home bearing gifts and with a beard that would stay to this day.

David undertook an Engineering degree at Southampton University (1969–1972), where he met Frances Merrett Smith, a young law student from Fareham, who was later to become his wife. On graduation, Fran took the first step towards becoming a solicitor and David decided to follow in the family tradition and study to become an officer in the Royal Navy.

From 1972 to 1976 David studied for a Royal Navy Short Service Commission in the Marine Engineering branch. He used the sword belonging to David Bremner III on passing out at Dartmouth in 1972. It was transported from Lossiemouth to Culdrose in a Royal Navy aircraft for the event, courtesy of Bill’s widow Cherry.

During 1973–1974 David was trained in Engineering at the Royal Navy College Manadon, Plymouth and on board HMS Torquay, including a round Britain tour of the UK in the latter. In 1974 he was a trainee on HMS Mohawk, in northern Norway. His time was mostly spent looking for the trawler Gaul, which had sunk very suddenly. By 1976 David was the Assistant Marine Engineer Officer on HMS Yarmouth. He moved on to serve in Icelandic waters for the second Cod War, where his ship rammed the Icelandic gunboat Baldur, requiring an immediate return to the UK for repairs.

David married Fran in 1975. They lived for a short time in Clanfield, Hampshire before moving north to Bury in Lancashire where David developed his career in a different direction.

During this period David and his brother Rick bought the first commercially available hang gliders. There were no instructors, so one simply had to teach oneself. Early flying included a family holiday in Loch Melfort, Scotland, where the boys flew down the hillside to the field behind the cottage where they were staying.

In 1983 David and Rick flew their first microlight; a Mitchell B10 flying wing. They had built it from plans, taking two years to complete. They taught themselves to fly it.

The next ten years would see David attain his microlight pilot’s licence obtained after only one hours’ instruction and a short test (1985). Then in 1990 he and Theo Willford, another Mitchell B10 builder, completed and flew a MW6T two-seat microlight built from plans over the previous two years. This aircraft was flown until 1996, when it was sold on (the new owners are believed to have wrecked it on first takeoff).

In 1995 David took part in a microlight rally from Madrid to London in another MW6 owned by a friend Peter Mercer. They won the three-axis class, getting back in about four days.

In 1996 David obtained a full private pilot’s licence on a 1956 Jodel D112, G-BEZZ. There was no electric start, so it required traditional hand-swinging. Other land marks were:

As well as the ‘day job’ (see below) David also edited the BMAA’s magazine Microlight Flying which included carrying out flight tests on new three-axis machines. (1995–2011).

From 1976 to 1980 David worked as development engineer for Sir James Farmer Norton Ltd, a manufacturer of textile finishing machinery in Salford. The work included trips to Turkey and New Jersey, and development of a patented machine that used spinning discs to spray a carefully controlled quantity of liquid onto fabric. In 1980 the firm went into receivership and he was made redundant.

His career continued during 1980–2005 working for National Vulcan (later Royal SunAlliance) in inspection of pressure plant, first as inspector, working from home in Bury and Rossendale, then as head office engineer working in Manchester, and then as auditor covering the UK, the US and Italy.

In 1995 David separated from Fran. He continued to look after Katie and Fleur with help from his mother-in-law. Life was busy with two teenage daughters to bring up single handed; but he always says this period was one of the happiest he had known since the girls were born.

David was thrilled that Katie and Fleur, both now in their early teens, were keen to share his interest in flying taking the passenger seat in the Jodel. But like all good things time moves on and when Fleur insisted on bringing along a book to read during the flights he guessed their interest was beginning to waver.

During this period David also sang as a bass in the Manchester Cathedral Cantata Choir, and sang for Pope John Paul II at the Vatican as part of a scratch BBC Choir that recorded Daily Services in various locations around Rome in 1992.

By 1997 David was travelling from Edenfield to Manchester and back daily on the X43 express bus to work. Here his eye was caught by another passenger undertaking the same journey each day and as luck would have it the lady in question sat herself next to him clashing his briefcase with her own! After a few moments of apologies the briefcases were tucked under the seats and conversation ensued. He asked Sue what her profession was and she informed him that she was a Bibliographical Researcher. Their friendship grew and one day David brought a huge roll of paper from his briefcase, unrolled it and introduced Sue to his family tree. The tree looked very comprehensive and was based on David’s grandfather’s research. But this didn’t satisfy Sue. Her interest was in the stories behind the names that stretched across generations. Friendship grew into love and Sue moved in with David in 2002, bringing with her boxes of books which she then interfiled with David’s book collection putting them into Dewey Order without the benefit of stickers on the spines!

David’s interest in flying was infectious and Sue too was smitten not just with David but with flying and aircraft. But we are side tracking—back to work.

David’s was now auditing companies both nationally and internationally as the Lead Auditor for the European Pressure Equipment Directive.

David was asked to make a presentation in New Delhi, India. He managed to work things out to enable Sue to go across with him. It was like visiting another planet. Everything was alien; the smells, sounds, street life and culture. David also managed to arrange a trip to Agra to visit the Taj Mahal. Now who says engineers aren’t romantic? David sneaked out an engagement ring and proposed to Sue at this wonderful location—of course she said yes. David and Sue married in 2004.

From 2004 to 2006 David and Sue spent their spare time building an aircraft in the garage (with three changes of door). Eventually G-IMNY—an Escapade microlight emerged from the garage towed on a special trailer designed by David (see below).

He has been on the Board for the British Microlight Aircraft Association since 2006 and Vice-Chairman since 2007. He is also on the committee of the Royal Aero Club, as a result of which he and Sue received an invitation to a Buckingham Palace garden party in 2009.

The Midlands of England

In 2010 David and Sue took the decision to move south to be nearer to Dinah and Ian. After much searching they found an ideal location; The Clock Tower which was part of Downton Hall near Ludlow. The Clock Tower itself is located in stables owned by Henry Daley who trains race horses. Although Downton Hall is not open to the public, David and Sue can take advantage of the lovely walks and life as part of this wonderful country estate.

David, his brother Rick and friend Theo Willford are now rebuilding grandfather Bunny’s Bristol Scout aircraft. It is hoped to have this aircraft airborne in time for the centenary of its participation the in the First World War.

In 2011 David and Sue visited British Columbia and Alberta in Canada to research his great great uncles David III and Charlie (J.C.C.) and the trip formed a wonderful climax to our family history research. We discovered the location of David’s plot on Lake Cowichan and tried to find the remains of his hut; we saw Kaslo and Silverton where he was a miner, and we visited his grave in Vancouver. We also found the inquest into his death and discovered that he was an alcoholic.

In Alberta we were fêted as local celebrities since Charlie’s house is now owned by the Strathcona County Council, and were treated to a civic reception at the Bremner House, as well as many other parties. In particular Strathcona County’s Lori Clapp and Jane Ross, with whom we’d had long-term email correspondence, showed us round the district and in particular the Strathcona Hotel into which Charlie and two friends rode their horses in 1892. But there were many others who made the visit so special; Rollie Bremner, Peter Stavely, David Drader and landlady Sheila and her husband Alan Smythe come to mind, but there were many more, and it never ceased to amaze us how universal was the interest in family history, and ours in particular.

In 2002 David and his friend Theo Willford started investigating the feasibility of rebuilding the Bristol Scout aircraft that was his grandfather Bunnie’s favourite. Research took five years, and in 2008 David’s brother Rick became involved in the build, which was completed in 2015, incorporating three parts that Bunnie had brought home as souvenirs in 1916.

The Scout, serial number 1264, is as original as possible, including all the modifications made during her service. In June 2016 it was taken by road to the Greek island of Thassos, where David flew her from the identical spot his grandfather did, exactly 100 years later. The following week on 2nd July 2016 he also flew her over the Newfoundland Park near Beaumont Hamel, the exact spot his namesake David was fatally injured in the first assault of the Battle of the Somme 100 years earlier. 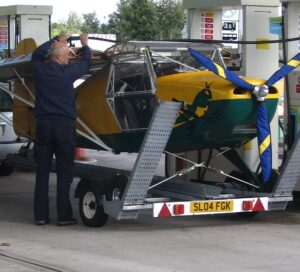 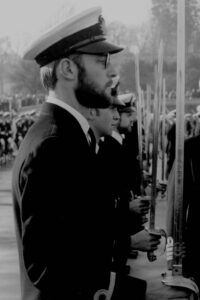 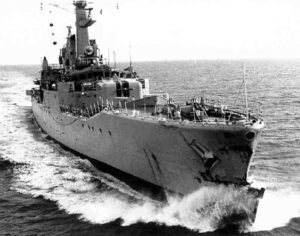 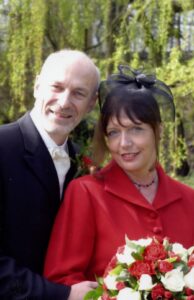 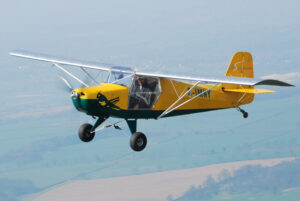 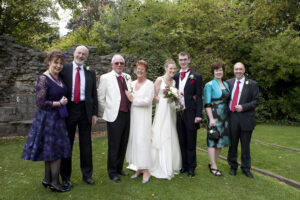 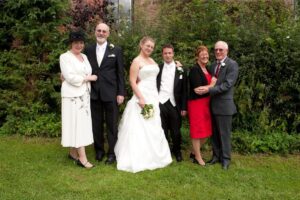 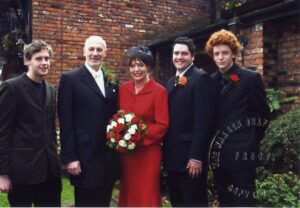 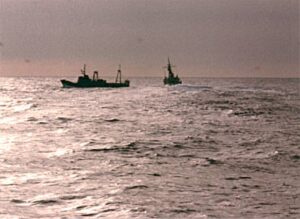