Bill’s father Donald had a distinguished Army career that led to an establishment position that allowed him to rub shoulders with the highest in the land.

Bill had a glittering military career in the Royal Navy, which ultimately led to a mysterious and largely unknown career in espionage.

In 1907, at the age of only 12, he joined the Royal Naval College at Osborne on the Isle of Wight as a Cadet, at the same time as his old sparring partner, the Prince of Wales. They graduated as midshipmen in 1912 and he went to join HMS Triumph in the Mediterranean Fleet—just like his uncle David twenty years before. He was there for only six months—it was probably a training appointment to give them basic sea experience—before he was sent to HMS Thunderer in the Irish Fleet. His reports are all outstanding; he has good French and some German, and is described as zealous, intelligent, most promising … presumably because of his qualities he was picked out to spend two years on exchange with the Australian Navy in HMAS Australia, where his suggestion for transmitting the range of guns to destroyers was much appreciated, though not ultimately adopted. While out there he was promoted to sub-lieutenant, and he returned in February 1915 to join the destroyer HMS Laertes. In October he was ill enough to require treatment at the King Edward VII Hospital for a couple of months, but in December he was sent to HMS Vernon (the torpedo school in Portsmouth) for ‘special services’. This was the development of Coastal Motor Boats; early high-powered planing boats powered by 250 h.p. petrol engines and armed with a machine gun or two and one (later two) torpedoes. Bill was one of a couple of junior officers who came up with the concept, intended to allow capital ships to be attacked in harbour, where they were normally protected by booms with torpedo netting. The idea was to have something small enough to fit into a cruiser’s davits, light enough and fast enough to jump the boom, and capable of delivering a torpedo within the confines of the harbour. The idea was adopted, and Bill received substantial reward (£2000) from the Navy for the idea.

The boats did 40 kn and the torpedoes only did 18, and Bill is reckoned to have come up with the idea of dropping them facing forwards from a trough over the stern. The boats were built by Thornycrofts, and a booklet dated May 1920 gives details of the boats and the operations they were involved in. The following appointments are all related to his CMB service, apart from a couple of treatments for gonorrhoea and syphilis (!) in 1917. On 22 April 1918 he was involved in a raid on Zeebrugge and Ostend for which he was Mentioned in Despatches, and on 10 May he was back at Ostend where he laid down a smoke screen and ‘… commanded CMB 22 and encountered an enemy torpedo boat which he attacked with such good effect, his only weapons being Lewis guns, that the enemy boat withdrew.’ He was gazetted on 28 August 1918 to receive a DSC.

In August he was set to writing a book on CMB tactics with Lt Welman while remaining in command of CMB 81A, and in July 1919 he was posted to Oslo to command CMB 79A to participate in a unique Naval action.

The purpose of this expedition was an extraordinary mix of espionage, unofficial warfare, and flagrant contravention of orders! The book, Operation Kronstadt by Harry Ferguson gives a brilliant, detailed account of the events, and we can’t do it justice here, but briefly, Paul Dukes was a concert pianist who’d become a spy in St Petersburg during the Russian Revolution. In fact, he was the only spy from any western power able to provide any information at all during that turbulent time. Lt Agar was seconded into MI6 to use the CMBs, lying idle since the end of the Great War, to slip past the line of forts in the Gulf of Finland and communicate with Dukes. While waiting in Finland for the next opportunity to contact Dukes, Agar flagrantly disobeyed his orders, and sank a Bolshevik cruiser that was bombarding an Estonian fort held by the White Russians. Instead of being dismissed in disgrace, he was awarded a VC, and a larger operation was set up using eight CMBs to sink the remainder of the Bolshevik ships in Kronstadt harbour.

Bill’s boat was first through the narrow harbour entrance, and got a clear run at its target—the Pamiat Azov, a submarine depot ship, which sank. He retired to the allocated spot inside the harbour to wait until the rest of the attacks were complete, but came under fire, and Bill was wounded. In moving the boat to another designated spot CMB 62 ran into him, and CMB 79A had to be abandoned, the crew transferring to CMB 62. By this time, CMB 62 was under fire, and they decided to try and break out of the harbour entrance. They came under fire from a destroyer, which they attacked. After the attack, the other commander was hit, and Bill had to pull him off the controls and continue the attack himself. They were hit by more shells, and the fuel tanks exploded. Of the two crews, only Bill and two others survived. Bill had received 11 separate injuries and was taken to the hospital in Kresty Prison. They languished there for seven months until talks between James O’Grady and the Russian Foreign Minister Litvinoff sorted out an exchange of prisoners. Those in hospital had been treated badly enough; Cpl England had part of his hip bone removed without anaesthetic, and LCpl Sylvester had an eye removed without anaesthetic (!) but the uninjured had been kept in unheated accommodation in the Russian winter with very little food. So little news came out of Russia that Bill’s Naval record has been marked ‘Killed in Action’—and then crossed out!

They were released to Copenhagen on 4 February 1920, where Bill got to stay with Lady Marley, while the rest of them were accommodated on a Royal Navy ship, and his father and brother travelled across from Harwich to bring him home.

A week later, Bill was at Buckingham Palace to receive his DSC, and a month after that he received his DSO for the Kronstadt action (the view among his peers was that he should have received the VC). There are plenty of archives for this, including Bill’s signed carbon copy of his report to the Admiralty of the action and subsequent imprisonment.

He was back at the King Edward VII Hospital on 26 April, no doubt to check on his wounds, but three days later he was given permission to go to the South of France for a month—and in July he went to Switzerland. Presumably this was all convalescence.

At the end of July he joined the Admiralty yacht Enchantress where he served for a year.

In July 1922 he was posted to the Admiralty on the First Lord’s staff, and in the September he was sent to Royal Naval College Greenwich for the War Staff course, which he passed Class 2 in the summer of 1923. Shortly before he left, he married Lorna Buddle Atkinson, heiress to a large fortune from mining interests in the North East, at Kensington, and was then posted to the Commander-in-Chief’s office in the West Indies as WIS—presumably intelligence?—officer. He had to pay his own way out there; was this because of his honeymoon?

He worked out there for two years, being promoted to Lieutenant-Commander, and being sent back on account of his health in July 1925. By August he was fit again, and in January 1926 he found himself back at college, this time at the Staff College at Camberley. During his time at Camberley, his first child, James (Jimmy) was born at Newcastle upon Tyne, where Lorna’s family came from.

In June 1927 he was posted to newly-commissioned HMS Berwick on the China station, where he was the senior Lieutenant-Commander. He served there for three years, when he was posted to the Naval Intelligence department in London, with a citation from the Commander-in-Chief China for his good intelligence work.

Because of his frequent trips away, his son Jimmy spent a good deal of time with his uncle Bunnie and cousins Ian and Christopher.

But this must have been a paper appointment only; four days later he was off to New Zealand for three years. We’ve no record of what his work was out there, but letters to his father at this time survive, and he used his off-duty moments to meet Bremner cousins out there, to play golf and some tennis. Presumably Lorna must have accompanied him because in May 1933 their second son, John Michael (Mike) was born in Newcastle.

In September 1933 he was back at the Admiralty, seconded to the League of Nations Committee, but was sick (including a visit to Queen Alexandra’s Hospital) the following year from October to December 1934. In January 1935 he ‘entered King Edward VII hospital at own risk and expense …’, but was working for the Committee until November 1935, when he became Naval Assistant Secretary for the forthcoming Naval Conference.

In July the following year he was put onto half pay. There’s no explanation for this, but it’s known that by this time he was working for MI6, and perhaps this was a way for his salary to come out of the right budget.

At any rate, in June 1937 he had been infected by a hypodermic needle while in Athens and was flown home, accompanied by his brother and Sir John Hunt, Harley Street specialist, in a C Class flying boat. Sir John Hunt told son Mike that he was in no doubt that this was an attempt to poison him. Ian says that his arm musculature was permanently affected by this incident, and by December he had been promoted to Commander and pensioned off for medical reasons.

From here on in, the information becomes very much scarcer, and we can only make some informed guesses. It’s known that he served part or all of the Second World War as second in command of MI6’s Cairo office. The nature of his work had put huge strain on his marriage, and during the war he and Lorna divorced, and in 1945 he married Cherry Jarvis.

A year later he and Cherry had a son, Robin, and his oldest son Jimmy also got married to Jeannie Hamilton Corrie (and no, the Hamilton name doesn’t indicate a family connection). In 1948 Jimmy and Jeannie had a daughter, Mary Rose. But Jimmy, who was a fighter pilot in the Royal Naval Volunteer Reserve, died tragically at Jeannie’s 21st birthday party in Porthleven, Cornwall. He had gone home from the party to their flat, picked up his service revolver, and was seen on the end of the pier in a fierce storm firing it into the air. Then a large wave came right over him, and neither he nor his revolver were ever seen again.

Later—possibly in the 1950s—Bill was posted to South America, and it’s assumed (but it’s only a guess) that he was on the trail of Nazis there.

He is mentioned in Kim Philby’s autobiography My Silent War: Autobiography of a Spy. In 1963, when Philby was on the verge of being uncovered, he returned to London from Washington by air. He says that Bill – ‘a fairly senior officer on the administrative side of SIS‘ – was sent to try and locate him on the bus from the plane to the terminal but failed to do so because Philby was sat right next to where he was standing. At this time he would have been in his late sixties.

He retired to Fochabers in Elgin, Fife, where he enjoyed fly fishing, although handicapped by arthritis.

But there was more tragedy to come. In 1967 Robin, who had followed Jimmy into the Royal Navy as a pilot, was killed in St Davids Bay flying a Hawker Hunter, leaving Mike as Bill’s only surviving son. 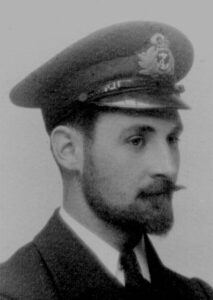 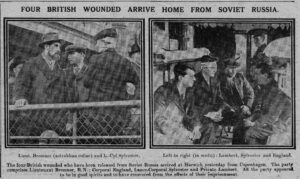 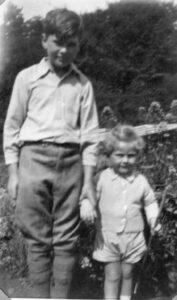 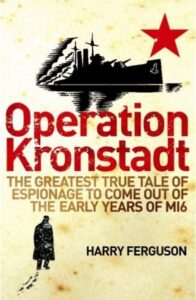 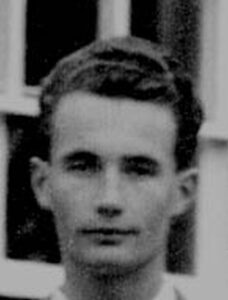 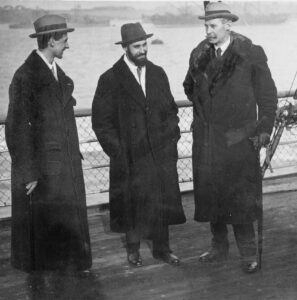 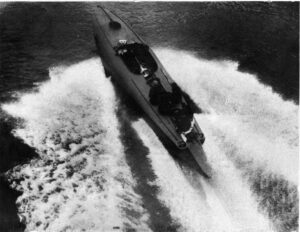 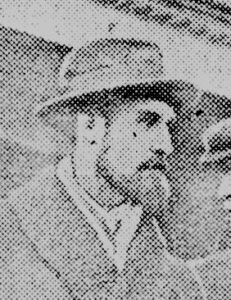 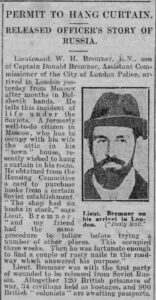