Because of the Bremner blood in Robert Hamilton’s family (both his wives were Bremners) we’ve always been interested to follow up the Hamilton family, since we might uncover additional cousins, but the relatively common name made tracing them much harder.

And then, in the way of things with genealogy, we had a couple of breakthroughs which opened up a whole new story, parts of which are still unfolding…

To remind you, Robert Hamilton had seven children by Catherine, and two by Catherines’ sister Sarah.

Family legend had it that Robert Jr went to India and became a tea planter with a glass eye.

I was curious, however, to try and find Alexandra Bremner Hamilton. Her middle name intrigued me, coupled with the fact that my own daughter’s middle name is Alexandra by coincidence.

The last official reference to her was her father’s death registration, which she signed, aged 18, but there the trail went cold. No marriage, no death. Where had she gone? And in another of those intriguing finds which the internet can suddenly throw up, there was an entry in a list of gravestones in a churchyard in Polibetta, Karnataka, India. Alexandra Bremner Mann, in 1904, aged 32. Also in the churchyard was a Henry Robert Mann who died in 1903, aged only one. So it seems when her father died, she went to join her older brother in India, met and married Herbert Martin Mann, and died a year after her infant son.

And then a couple of connections popped up through the Ancestry website.

First, we were contacted by Shona Osborne in Colorado, who had inherited photograph albums from her ancestor, Andrew Hamilton, who’d emigrated to New Zealand from Glasgow. Andrew, it transpired, was Robert senior’s brother, and had clearly been kept informed of family news from the auld country. The album even included a picture of my great grandfather, Donald, aged 21 and in Royal Artillery uniform in Malta!

They also included photographs of the two Bremner sisters Catherine and Sarah – the first time we’d ever seen them before. But that wasn’t all. Here were photographs of Alexander, the eldest of Robert’s children, taken in Bangalore, India, and a wedding in India, identified only as a cousin of Andrew’s.

Secondly, we received an email from Susan and Graham Adams, who live only just round the corner from us. Susan is related to Herbert Martin Mann, and they were interested in his short-lived marriage to Alexandra. Through them, we were able to find out that much of the area around Polibetta is coffee-growing country, and that both Alexander Robert had lived there. They went to Polibetta to research the Mann family (which includes all sorts of juicy family secrets) in spring 2013.

In fact, in one of those weeks when everything happens at once, my daughter Fleur Alexandra gave birth to Alexandra (Lexie) and Shona removed the wedding photo from its album in Colorado, to find that on the back it positively identified it as the wedding of Alexandra to Herbert Mann, and Susan and Graham Adams rang to say that they’d pretty much established that the hotel they are staying at in Polibetta is the one in the background of the wedding photograph!

So then we did some more digging, and found that Robert Hamilton (the one with the potential glass eye) had married an English girl, Frances Bearne, in Bangalore. And, wouldn’t you know it, Christina Hamilton had married an Alfred Jackson in Madras. And finally, it seems that J G Hamilton (possibly our James Hamilton) was chairman of the United Planters’ Association of Southern India in the first decade of the 20th century. In other words, five of the seven children of Robert and Catherine had lived in the Polibetta district of India. We are waiting with baited breath to see what the Adams come up with when they visit.

So much for Catherine’s children. What about Sarah’s?

We’d established that after Roberts’ death she and her children, twins David and Sarah, moved to 37 Woodstock Road, London in time for the 1891 census. David is listed as an apprentice electrical engineer.

By the 1901 census, they had moved to 4 Forest Place Villas, Leyton in Essex, where David (27) is an Electrical Engineer. Mother is 65, and daughter Sarah is a tea merchant’s typist.

Mother Sarah died in 1922, at the ripe old age of 86. It’s amazing to think that she’d been born in Wick, brought up in Cork, moved to Glasgow to help bring up her sister’s children, married in Switzerland, and then moved to London.

Neither of the twins married, and Sarah died in London in 1947, David dying a couple of years later – also in London. But we found that in his will he’d left his estate to a Wing Cdr Alan Howard Jackson, and the reason for this wasn’t clear, until we discovered that the Wing Cdr (who’d had a distinguished career in the RAF in both World Wars) was the son of Christina Eliza Hamilton, who was David’s aunt, and stepmother!

And so to the latest chapter in the Hamilton Saga. Shona Osborne is originally from New Zealand, whence Andrew Hamilton had emigrated. Then, out of the blue, we had an email from Gillian, whose husband is Peter Bremner Hamilton. Peter is an organist at a church in Sydney Australia, and, astonishingly, his grandfather is James, the elder brother of poor Alexandra. James begat Leslie at the age of 54 and Leslie begat Peter at the age of 37. At any rate, Peter and Gillian visited us in the summer of 2014, and brought over a cigarette case that had been owned by Peter’s great grandfather , and my great great great grandfather, Alexander Hamilton.

We are both curious to know what happened to James between the age of 17 in Glasgow, and his marriage to Lily Ferris in Australia in 1910, aged 46. We feel sure there’s another story lurking there, but neither of us knows what it is. Suspicion currently falls on India, whende so many of his siblings went, but we’ve not come up with any firm evidence. 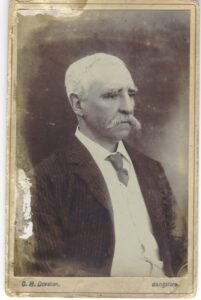 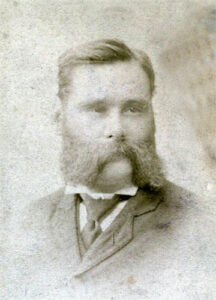 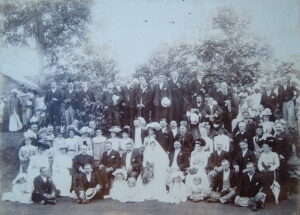 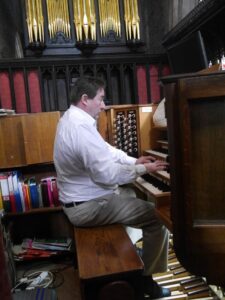 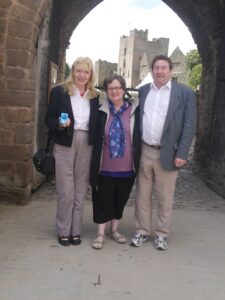 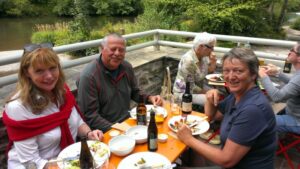