The furthest back we’ve been able to trace is a James Bremner (we’ll call him the First), who registered his son, James (the Second), in Wick parish church on 12 March 1742.

At that time the wife’s name wasn’t recorded, and it’s very difficult without gravestone records to trace back any further.

Parish records indicate a James Bremner (i.e. the First) marrying a Janet Bremner on 11 March 1738, and another J.B. marrying a Margaret Harper on 1 November 1733; whether either of these is correct is anyone’s guess.

But we know for certain that son James (the Second) was born in 1742. The most original source for his life and career are given in a memoir written immediately after the death of his distinguished son in 1856.

His father was a man of great muscular strength, uncommon energy of character, and high moral principle, and continued to exert considerable influence in the district till his death, which took place after he had reached an advanced age, and after a prolonged service in defence of his country. Joining the well-known ‘Buffs,’ he was first sent to the West Indies, along with 850; and, after a ten years’ servitude there, during which he was thrice wounded, he returned to his country and home, the number out of the 850 who did not find their graves on a foreign shore being only 27. Soon after his return the Irish rebellion broke out; and though he was well worn out, he did not hesitate to shoulder his musket again; and accordingly, in 1786, we find him at Bantry Bay, where he was recognized by General Dalrymple, one of the 27, and through his influence was appointed to take charge of an escort in conveying a number of the leading rebels who had been captured, to Fort George. There he remained for some time.

The same, or similar words, appear in other documents about James’ son, the Engineer, and are presumably drawn from this account. Some refer to the Ross-shire Buffs and others to the 3rd Regiment of Foot (also called the Buffs).

But there are a number of anomalies in it.

The Ross-shire Buffs were the 78th (Highlander) Regiment of Foot, which weren’t formed until 1793 and weren’t called the Ross-shire Buffs until 1795. That would entail James joining at the ripe old age of 49! However the 3rd Regiment of Foot (Scots Guards) (also called the Buffs), were stationed in England from 1771, Ireland from 1775 and South Carolina in March 1781, and thence to the West Indies in December 1782.

The Irish rebellion was in 1798, not 1786, (which would make James 56) but the British forces in Cork were indeed led by General William Dalrymple, who had served in the West Indies and in America—most notably in the defeat of the Caribs in St Vincent in 1772, and who appears to have continued to serve in America, at least until 1780.

So let’s try to connect some of the facts. There seems to be a strong link with General William Dalrymple. He was in Cork, and could have detailed James to escort prisoners back to Fort George in 1799. There is also a link between the General and the West Indies, via the St Vincent campaign of 1772, though Dalrymple was only there for a year, and the Buffs were in England at that time.

There is greater difficulty in making sensible connections with either Buffs regiment. The Ross-shire Buffs were formed too late to have been of any interest. The 3rd Regiment were traditionally based in Kent; indeed in 1782 they were renamed the Third, or East Kent regiment. They were based there for ten years from 1752, and while they were enlarged greatly in 1756 it seems likely this would have mainly been drawn from Kent.

But after a lot of digging around on the internet, including General Dalrymple’s own 14th Regiment, we came across the 32nd Regiment of Foot who were stationed it St Vincent for 10 years from 1763 – 1773. They were involved in the First Carib War, and while they weren’t under the direct command of William Dalrymple, it’s entirely possible they might have come into contact with each other – and even if they didn’t, the common service there could have been sufficient for them to become acquainted in 1798. But the date coincides nicely with the birth dates of his children.

And finally, we came across a possible link. The muster rolls for the 32nd don’t exist for their time in the West Indies, but our faithful bloodhound Ann Swabey found a James Bremner in the rolls from Christmas 1761 – June 1764 (ref WO12/4725) in Dumfries, Edinburgh and Chatham, after which presumably they went to the West Indies. By the time the muster rolls start again in April 1772 (in Chatham, – presumably on their return from the WI) he’s not there.

Then for his Irish service, there is another possibility. The Fencible Regiments were formed of career officers and local men primarily for home defence, but several Scottish Fencibles (the 3rd Sutherland, the Rothsay Caithness, the Inverness-shire, etc.) were formed at Fort George around 1795, served in Ireland, and were disbanded around 1799 – 1802. In particular, the Rothsay and Caithness Fencibles recruited in the Caithness area and served in Cork.

And lo and behold, Ann came across a James Bremner, listed as a sergeant, in the second Battalion, the Rothsay and Caithness Fencibles under Sir John Sinclair.

James married Janet, whose maiden name was Bremner, Barney, Brims or Riach. Their son James’ death register gives it as Barney, the Parochial register for the birth of son John is Brims, and W.H.B. research shows Riach, per D.W. Georgeson, whose wife was the daughter of Janet’s brother. D.W.G. was the principal solicitor in Wick.

Janet’s age on the gravestone in Wick ties in with a parish register entry for the birth of a Janet Bremner (if that was her maiden name) also in 1742, to a John Bremner, but as with the others of this generation, that’s pretty much speculation, since we can’t find an entry for their marriage.

They had (according to Mowat) nine children, only three of whom survived childhood. We’ve only been able to trace six of them, with two traceable as adults.

The two who made it to adulthood were direct ancestor David (b.1779) and James, five years his junior. A third, Christina Bremner, is noted by W.H.B. as married to William Leith, and although the wedding is noted in Parish records, there’s no record of her birth to James and Janet.

James died in 1819 at the age of 77, his wife having died four years earlier; his gravestone is in Wick Kirkyard with his illustrious son and their family alongside. We don’t yet know when he left military service, but the fact that he’s buried in Wick suggests that having spent all his early years in Stain and brought up his children there, he may have retired to Wick, where both his sons were making careers for themselves, and the younger one in particular was becoming an engineer of national significance. The fact that his son’s memorial is alongside that of his father suggests that he was held in very high regard.

More in this section 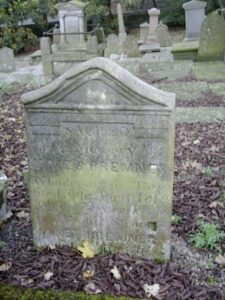